I decided to give you a little more background with my time spent in Ghana and go all the way back to 2013 to my first trip. My present time in Ghana will be in the post after this one.

There is one place in the world that I have always felt drawn to visiting, Africa. Africa is huge but I’ve always felt connected to African culture and a pull to volunteer somewhere within the continent. Ndor Eco Village is the name of the project based in Hohoe, Ghana. A non-profit grassroots organization created with a vision in mind, to promote rural education and sustainable agriculture. Every child deserves an education, living in a small village many children miss out on opportunities that other children in Ghana have. One of the project’s missions is to bring the opportunities to them. You can read more about Ndor Eco Village, see pictures and learn ways to become involved through the website.

My first time volunteering in Ghana was in 2013 for one month. This was also my first time traveling outside of the United States. To some level, I always knew I’d make it to Africa regardless of money concerns. My soul was being pulled there and I knew that I had much to learn. When I first got there, I recall feeling this inner calm, a deep breath of fresh air. I never felt as comfortable in my own skin and as healthy as I did when I was in Ghana. Eating fresh fruit and vegetables from the land and drinking bottles upon bottles of water was a cleanse that I didn’t even know I needed. 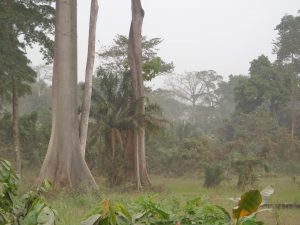 On my trip to Ghana, I was accompanied by Cha Cha and Ashley. Ashley and I soon became friends, wandered the land together and walked for what seemed like forever in the blazing sun. We shared a room together with bright pink painted walls and a small electric fan. There were times at night where the electricity would shut off for an unknown amount time and we would wake up sweating, to step outside and see the rest of the family laying out under the stars. One night I pulled my mattress out there too, unfortunately, I forgot to put on bug spray and woke to around 30 bug bites at my ankles. Bugs are really sneaky, you often don’t even feel them on you, yet you have bites all over. I’m grateful to have shared this experience with another woman, something I will forever cherish.

In Ghana, it comes across as disrespectful if you don’t greet the people you see, whether it be walking down the street or walking into someone’s family home. You always say hello and ask how they are doing “Ayfwa”, in response, I am fine “Ay mayfo”. As you make your way through the village you will hear people say “wayzo”, often from across the street or in passing. This means welcome, they are welcoming you to their village, the proper response would be “Yo” meaning, ok (showing you achknowledge them). Learn these simple phrases and you will always be greeted with welcoming kindness. Ghanaians are very confident, they want you to learn their language and are always willing to share their food with you, no matter how much is on their plate. Their confidence at times may come across as intimidating but their hearts are made of gold. If you make even the slightest effort to learn about them they will welcome you with open arms. 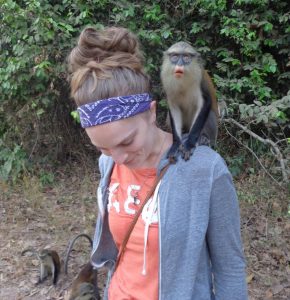 While we were there we mainly worked on digging up clay, which would be used to mold bricks for the guest house building. We visited the village of Aklorbortornu where we donated some school supplies to a group of children who have limited opportunity for education and no school building. One of Ndor’s projects is to build those children a school. In our free time, we were able to go on adventures through town, see the monkey sanctuary, Wili Waterfall, and observe at a local school. Being a teacher I always look forward to seeing how schools in other countries are run. You can read more about my school observations in the Ghana education post.

Cha Cha and I took a trip to the monkey sanctuary. This was Ashleys second time in Ghana and she went to the sanctuary the first time so she decided not to come with us. After a few hours driving, we arrived. The sanctuary is right next to a small village, so with it being a Ghana tourist spot, it brings business to the locals. After we paid a small fee we were off with bananas in hand looking for the monkeys. There is a certain call our guide made that brought the monkeys out of hiding. Since they know this call means bananas, they all emerge from the trees. I stretched my arm out while holding a banana and a monkey came running, full sprint, straight up my leg to sit on my shoulder. He ate his banana and continued to sit there for a few minutes before jumping off back into the trees. When he ran toward me I was thinking his nails might scratch me but then he climbed up my leg so gently and effortlessly that I almost didn’t even feel a thing. His hands were similar to human hands and his eyes were deep. You could tell he was an intelligent being. Since the drive was far we stayed overnight at the sanctuary in small huts that had multiple beds. When night came and the mosquitos started coming out I realized I forgot my bug spray. There were tons of bugs and creatures so this was not the best place to be forgetting spray. I enclosed the mosquito net around me and hoped it was good enough. I woke alive and well and we headed back to Hohoe. 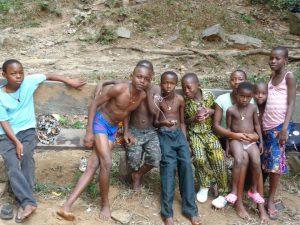 On a different day we gathered up a group of the local kids and kids in the family and went to the Wli waterfall, the tallest waterfall in Ghana. Many of the children rarely leave their towns and villages so this was a special time for them. It’s respectful as a foreigner not to show too much of your body, so we wore leggings and tank tops and walked into the water. I remember being pulled to go closer and closer and at one point I was directly under the waterfall. It beat down on me so hard that I lost my breath and had to step out. The majority of the children can’t swim because they don’t have the opportunity to practice so they stayed at the edge, just splashing around in a foot or two of water. At one point we looked at the waterfall and this beautiful rainbow appeared, spreading across the waterfall. You can see a picture of it on the first blog post. The song natural mystic came to mind, it was a magical moment. Being in Africa and seeing certain situations, many Bob Marley and the Wailers lyrics began to have a whole new depth and meaning for me. At times it was as if I was seeing the visual representation of the lyrics and as I sang in my head it brought a smile to my face. You can hear a lyric and enjoy the words, but just like the Grateful Dead, sometimes you have a moment in time where you’re like whoa I actually understand because I’m experiencing it. When I saw people sleeping on the cold ground and wearing shoes too small for their feet, the song “Talking Blues“ became a powerful one for me.

When you hear about Africa on the news, in general, its portrayed as very poor with violence and hungry people. The commercials, movies, and images that are shown put fear into peoples minds about traveling to an African country. I recall people getting worried telling me that I’ll get sick, get malaria, or possibly even die there. Besides your occasional homeless person on the street, from what I saw of Ghana everyone seemed to eat enough. Yes, there are countries in Africa where people are hungry and malnourished but I think we need to stop giving the entire continent of Africa that image.

During my time in Ghana, I became Vegetarian. Being an animal lover it was really hard for me to see the starving dogs, cats and overall way the animals are handled, but this is part of being immersed in another culture. You have to see it how it is without judgment, in my option, it’s just a lack of knowledge. Animals to them along with many other cultures are strictly for food, guarding the house or work purposes, nothing more. Coming from America where we treat our ‘pets’ like family, it was quite different and took some adjustment. I cried quite a few times during this trip and I would often cover my ears when the chickens were being gathered to be put away for the night. The sound of discomfort and pain is a sound you can’t fake. The shocking part was, I thought if I were to cry about something it would be for the people, not the animals. I was very much wrong. I cried not only for the animals but for people living in the United States. Many of us have strayed so far off from living a natural life and it was becoming even more clear to me that the simple life is my American dream. 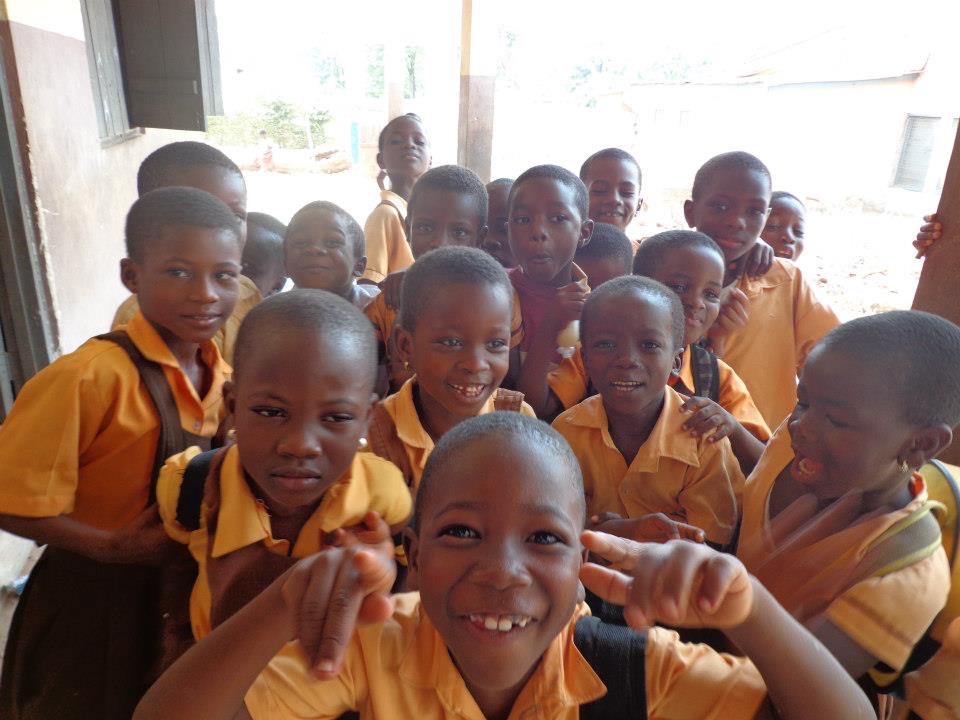 My favorite part of Ghana was meeting all of the children, which seems to be my favorite part of every country. They are eager to learn and are very funny! I will never forget all those smiling faces or their reactions when we walked into their schoolyard. In a matter of seconds, you have about 20 children crowding around you. There were moments where I had children touching my skin, just to touch it, or multiple little hands wanting me to hold theirs. They often tried to scratch my freckles off because they’ve never seen them before or touch my hair because blonde was new to them. The children were very hands-on and always willing to shower you with infinite amounts of love.

Overall the first trip to Ghana was an eye-opener for me and life-changing. It reminded me of who I am and what I stand for. Cha Cha’s family was friendly and made me feel right at home and when the day came for me to leave, they reassured me that I would always have a home in Ghana. 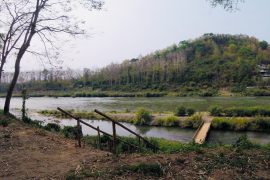 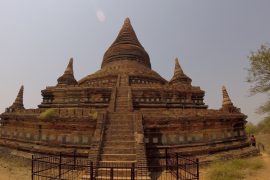 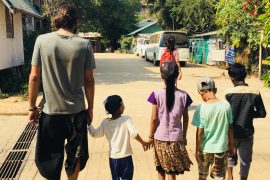